I’ve been trying to learn a little more about graphic novels–a literary genre that I have almost no experience with–and pulled from the public library shelf Gilgamesh: A Graphic Novel by Andrew Weingarner. I have always been fascinated by the epic of Gilgamesh, the oldest written story known to humanity: I loved the old John Gardner translation of the story, and I had a good time with this graphic retelling. The various cosmic monsters that Gilgamesh battles are drawn very well–they’re intense, original, but also evoke a Mesopotamian vibe.

The central partnership in the story–the ur-dynamic duo that informs so many later character dyads–is that of Gilgamesh and Enkidu: Gilgamesh, the civilized, anxious, ambitious king, and Enkidu, the wild and natural “hairy man.” The duo appears later as Don Quixote and Sancho Panza,  as Prince Hal and Falstaff, as Han Solo and Chewbacca.

And, I realized a little later, as Finn and Jake from Adventure Time.

Besides the cosmetic similarities of the two pairs, Finn the human boy and Jake the magical talking dog are also spiritual and characterological siblings to Gilgamesh and Enkidu. Like Gilgamesh and Enkidu, Finn and Jake are perfectly matched combatants, each unable to defeat the other, whether in combat, in their long-running pranking competitions, or in their frequent video game and Card Wars match-ups. Like Gilgamesh, Finn is a rambunctious upstart, eager to attack real or perceived injustice head-on, usually through violence. Like Gilgamesh, Finn is also beset with anxiety–often as a result of his phobias or bad dreams–yet Finn and Gilgamesh are also paradoxically able to set aside their nagging dread and fight fearlessly, even foolhardily, in battle.

Jake is a striking modern recreation of Enkidu, literally a magic talking animal. In much the same way that Enkidu advises and guides Gilgamesh, Jake is wiser and more experienced than Finn in most matters, especially those relating to the basic animal appetites for sex and sleep and food. 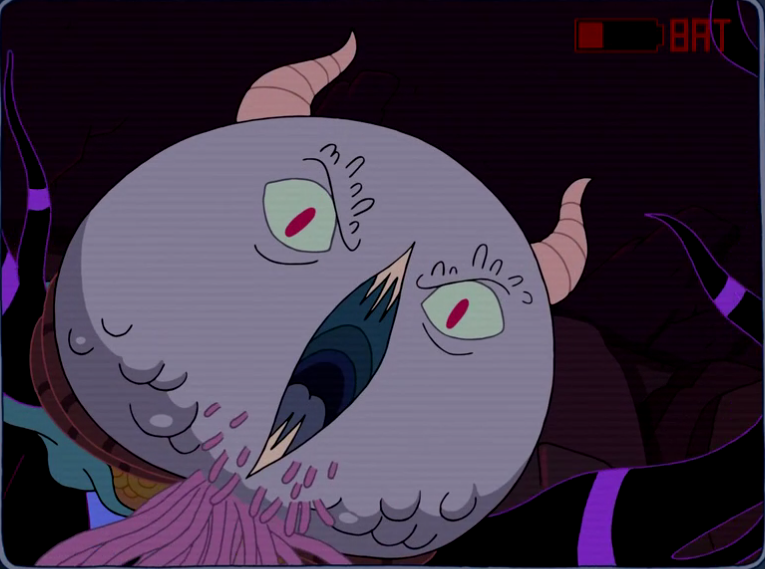 Found on a Mesopotamian fresco…

The mapping of one duo to another isn’t perfect–Gilgamesh is a character rooted in a 3000 year-old value system that doesn’t translate well to our own. He is cruel by our standards: violent, an abuser of women, a despoiler of the environment (ironically, the pre-civilized Enkidu is much easier for contemporary readers to sympathize with). But the Gilgamesh-Enkidu pairing still speaks to us in much the same way that Finn and Jake speak to us, because the relationship is archetypal. The relationship speaks to our odd predicament as creatures that are both animal and transcendent of our animal nature: we are, as Hamlet says, “in action how like an angel! In apprehension, how like a god,” yet we are at the same time deeply aware of our brutish status as just another mammal, tied down to the “Four Fs” of feeding, fighting, fleeing, and reproducing that govern all animal life. For both Gilgamesh-Enkidu and Finn and Jake, we are promised that all good things in life–justice, mercy, peace, love–come to us when these two natures are reconciled and act in partnership. We are warned that madness follows when we act in opposition to it.

2 thoughts on “Finn the Human Boy: a Modern Gilgamesh”