When a musical like Hamilton comes along, a rational response to the buzz is for folks to, you know, want to see Hamilton. Others might be overwhelmed enough by the positive press to look to Hamilton‘s source material, the gargantuan Ron Chernow biography of the man on the ten dollar bill.

Others, the cheapskates and musical theater philistines, might turn instead to The Federalist Papers.

Yes, I started reading The Federalist Papers because I heard Hamilton rapping on NPR for a minute and I realized that I hadn’t really read anything Hamilton had written.

I suppose if I’m really honest with myself, I do have to admit that fear for the future of America, at least as much as Lin-Manuel Miranda, is really what sent me to The Federalist Papers. As I watch the current president’s bumbling yet earnest assault on the Constitution–his flouting of the emoluments clause, his apparent ignorance of the establishment clause, his barrelling through each conversation as though the separation of powers didn’t exist–I realize that I don’t know enough about the document that the president is trying to subvert.  I have read the Constitution, and I’ve sure been going back to my pocket copy a lot lately, but like a powerless fanboy, I want to know more, to know it better. And The Federalist Papers, I’ve been told, are the inspired commentary on the US Constitution, the brilliant liner notes to that Sergeant Pepper’s Lonely Hearts Club Band of legislation.

I’m about a third of the way through so far, and it’s very slow going. All three of the authors–Alexander Hamilton, James Madison, and John Jay–learned to write in an age when a man showed his genius by teasing each sentence into a froth. Each sentence has a multi-layered, architectural quality, like the 18th century wigs that Hogarth lampoons in Five Orders of Perriwigs. 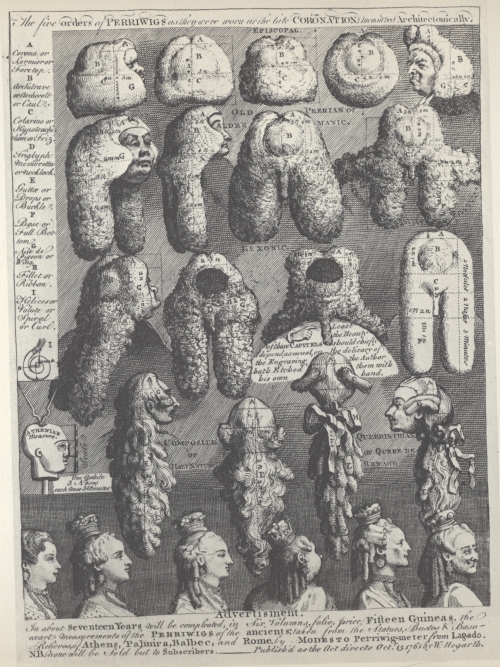 Of the three, John Jay is the most straightforward of the writers, the one least inclined to pile on the relative clauses. Imagine my dismay, then, to learn that John Jay wrote by far the fewest of the papers–only five of the 85–before illness forced him to give up the project. Hamilton, who wrote by far the most of the papers, is also the hardest to read. Every sentence of Hamilton’s is like listening to a Yngwie Malmsteen guitar solo: his paragraphs are spattered with commas, packed with dependent clauses that double back on themselves and seem to eat their own tails. And they are also filled with some of the most brilliant and vigorous writing I’ve ever seen.

This sentence, from Federalist #29, is typical Hamilton:

There is something so far-fetched and so extravagant in the idea of danger to liberty from the militia, that one is at a loss whether to treat it with gravity or with raillery; whether to consider it as a mere trial of skill, like the paradoxes of rhetoricians; as a disingenuous artifice to instil prejudices at any price; or as the serious offspring of political fanaticism.

Wow–I had to crawl through this sentence few times before I could tell what Hamilton was actually arguing: that militias are no danger to public liberty. However, one look at the rigging of this sentence is enough to warn me not to treat his ideas with raillery. A sentence like this demands to be treated with gravity.

I was also fascinated to see, in this sentence and elsewhere, how current Hamilton’s ideas are. Dust off the perriwig of his prose, and you can see that we are still  debating “the idea of danger to liberty from the militia” in this era of Cliven Bundy.

But what has impressed me the most so far about these letters is the high-wire act their authors pulled off. The three men, all writing under a single pseudonym–“Publius”–managed to pump out 85 of these essays over just ten months. That’s one letter every three or four days, each one a Niagara of commentary intended, I imagine, to bury the Constitution’s opponents under a flood of historical references, musings on American geography, and speculations on human behavior.

The newspapers these essays appeared in, The New York Packet and the Independent Journal, were two of that enormous flock of early American newspapers. I remember reading somewhere that most such papers had a circulation of about 1000. Publius was, in other words, much like an early blogger: a pseudonymous team of writers with a tiny audience, writing their asses off to produce brilliant content several times a week.

Dilettante that I am, I have nothing comparable to offer the country here at The Subway Test. I post a couple of times per month, sometimes about politics but usually not. Usually my topic is, in Homer Simpson’s words, “what some nerd thinks about Star Trek.” Yet I can reach back those 230 years to the brilliance of Publius and see that I am pushing my little cart up the great track they laid. If you want to resist the depredations of the current presidency, you have to educate yourself. Read The Federalist Papers. It is one of those books that will comfort you with the underlying genius of the republic. More importantly, it will help you understand what the hell you are defending when you stand up to the current president.