When I was  in sixth grade, I made a map out of my imagination. I drew it in colored pencils on six pieces of graph paper which I connected with masking tape, so that I could fold it like a codex or some mystical road map. While I’ve largely forgotten what it looked like, I remember that I had drawn a continent which clustered around an inner sea, a dragon-infested Mediterranean. The land was divided into kingdoms and empires, a crazy-quilt of realms filled with Dungeons and Dragons creatures, which is to say filled with a Lord of the Rings-fanboy descendants of Tolkien’s elves and dwarves and orcs. 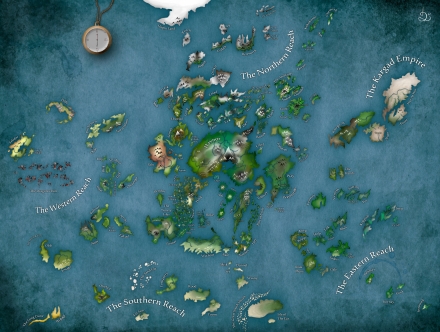 A Map of Earthsea, by Liam Davis, after Ursula Le Guin

What first drew me to fantasy and science fiction as a reader, and as a gamer and as a writer, was the world building. I’m reminded of the words of a friend’s son who said that you can tell if a book is going to be good if there’s a map at the beginning of it. When I read fantasy as a kid, I could put up with a lot of weak writing–poor characterization, wooden dialogue, tedious exposition–if there was a map in the book that represented a world that I would want to exist.

And yet, a map is also judged by its verisimilitude. Middle Earth, Earthsea, The Hyborian Age all drew me in with their plausibility: however oddly shaped the continents, those drawings seemed like maps of the actual world from a much earlier time, or a map of what might be the world. A map with no connection to a world that the reader does know is a useless map.

That’s the tricky thing about world building. There is no building a truly new world, untethered from any human world. Every map we draw, every pantheon of ancient deities we imagine for a game world or a novel, is a variation on a theme that was laid down in the real world. The Shire looks a lot like rural England. Earthsea is an imagined Bronze Age for the San Juan Islands. Gormenghast is the drama of a noble English house played out in Beijing’s Forbidden City. The City in Little, Big is New York City. The challenge with such world-building is to arrange these oddly-lensed realities into a world which seems totally distinct.

There’s a tension in fantasy and science fiction–as there is with all art–between the craving for the new and the comfort of the familiar. Audiences long for the new world, that giddy disorientation that comes from reading of an unfamiliar hero or a far country and knowing that these people and places fit into a coherent world that the book is slowly uncovering. But readers also crave the comfort of recognition, in the original sense of the word recognize: to know again. That is, readers are still happy to pay for something that reminds them of Lord of the Rings or Alice in Wonderland, no matter how many others complain about how much derivative fiction is out there. A book with a map that looks something like the real world is far likelier to appeal to readers than a book with a map of a totally new place, a place so different as to be unrecognizable. But some, thank goodness, can’t rest until they find the totally new place.