scientific literacy, sociology of science, The March for Science 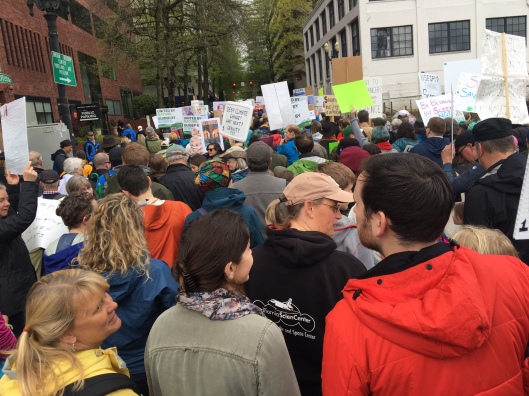 I’m not a professional scientist. I do have enough training to work as a lab tech if there’s ever some neo-Maoist Cultural Counter-Revolution where we’re all rounded up and forced to work in research facilities–it goes without saying that that won’t be happening during this administration. I’d be reluctant to call myself a scientist because I have published no peer reviewed papers, and my field work is competent at best (and often in graduate school I wasn’t at my best).  Having said that, I have actually worn a lab coat and safety goggles as a part of my job–for a week here and there, anyway–and I  have all the love for the scientific enterprise that an enthusiastic amateur science fiction author can have.

Across the republic, the streets were filled with people like me last Saturday at the March for Science. Well, based on the signs people were carrying, I’m sure that a lot of the marchers were bona fide scientists–at least bona fide lab techs and grad students. And, while there has been a healthy debate within the sciences about whether this kind of public advocacy is helpful or harmful to the cause of science, put me down as one who believes it’s valuable for scientists and science-lovers to stand up and be counted.

Faust does have a point: I suspect few of the people on the march this weekend understand what statistical significance really refers to, and even fewer would be ready to talk about the many misuses of p<.05 that researchers engage in because they’re trying to score a publication (or, more likely, because most scientists are not statisticians and often use statistical tools in ways they were not intended).

And yes, that’s a problem. But that’s not what the march is about. One can support the scientific enterprise, be willing to march in the rain for it, without knowing everything about science. None of the marchers, even the scientists, have a full understanding of all of the sciences humans engage in. The geologists on the march don’t know any more than I do about high energy physics, and the high energy physicists know less about environmental biology than I do.

Many of the scientists out there, even the duffers like me, know that there are deep problems with the sociology of science, with the misuse of methods and publication and statistical analysis. But something the marchers all had in common, scientists and non-scientists alike, was a support for the idea underlying science: that the scientific method can be used to describe our environment and make useful predictions. Faust is right that the scientific method is a roundly abused idea even within the sciences, to say nothing of non-scientists. But one can love and support a good idea without understanding it fully.  Whether any individual marcher can be picked out of the crowd and made to follow the scientific method to Dr. Faust’s satisfaction is beside the point.

The scientific enterprise is flawed, just as representative democracy is flawed. I marched because I believe in the idea of science (and, for that matter, representative democracy). The way to reform the institution of science is the same as the way to reform the republic: it will be saved by people who care for and love those institutions. Science and civil society won’t be reformed if we roll over when the administration attempts to hobble the EPA or reverse even modest US actions to counter climate change.

It is with mixed emotions that I retire my current profile photo for this blog: good old Mr. Methane: 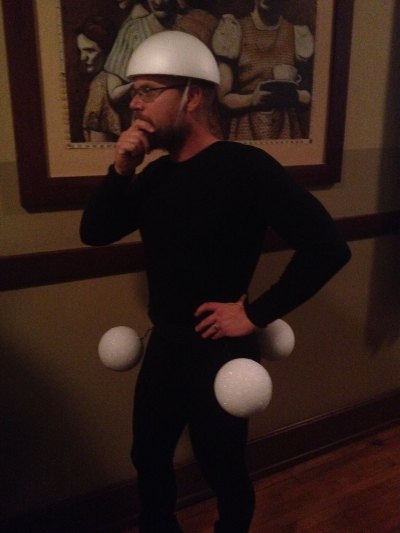 This is one of my favorite pictures of myself, taken by my wife on Halloween 2015. I thought I did a decent job making myself into a ball-and-stick model of the most frightening greenhouse gas on the planet. And the picture captures what I’ve always considered the essential ridiculousness of my writing enterprise.

But, I suppose if I want people to take my writing seriously, I might get more of the right kinds of attention if my profile pic doesn’t show a man in a black body suit and Styrofoam deedle balls.

And, I’ve been lucky to work with a truly talented photographer, Pat Rose, who took the most flattering photos of me I’ve ever encountered. The one I call “Smiley Joe” will go on the back cover of Stranger Bird when it comes out: 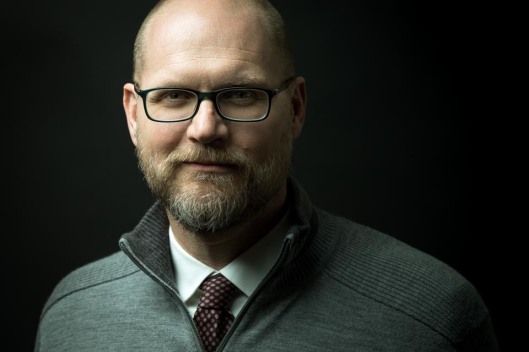 And for the blog itself, I’ll be using another of Pat’s fabulous shots, the one I don’t have a name for yet:

I’m open to any names you want to suggest. “Oddly intense sci-fi man?” “Half-light Raconteur?” Really, he needs a name.

And old Mr. Methane? My wife had the genius idea that I should pull the old costume out for the March for Science. If I can wear a black bodysuit and stand up for civil society? What more could I want out of the weekend?